I spit on your puny Earth Simulator! 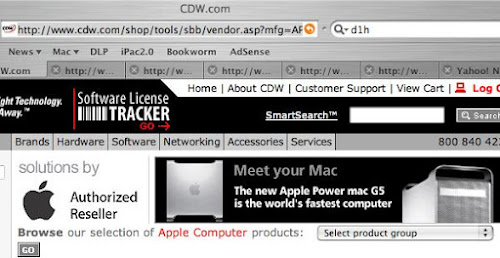 A couple months back, Apple introduced their Power Mac G5, based on IBM's PowerPC 970 chip in configurations up to a dual 2.0-gigahertz one. They touted it as "the world?s fastest personal computer and the first with a 64-bit processor."

This met with all kinds of whining from, well, all sorts of people. AMD users, for example, protested that since a small-time specialty PC maker had started selling workstations with AMD's 64-bit Opteron CPU in early June, Apple wasn't selling the first 64-bit personal computer.

This took quite a bit of cognitive disconnect. Let's see... one computer is sold as a "personal computer," to people who expect to run all kinds of general-purpose software, from Microsoft Office to AOL. It uses a chip designed for personal computers. VH-1 runs ads for it. It sells hundreds of thousands of units a year. It's available at hundreds of stores all over the world, and via dozens of mail-order catalogs.

The other system is sold as a workstation to people who're going to be rendering video and animation, uses a chip designed for a server, and is available from... it manufacturer, and a couple dozen resellers in other countries. Sound like a "personal" computer of the sort you'd find in someone's house? Nope.

Just to be snarky, one could point out that the "workstation" has a slower bus, slower RAM (and less capacity for RAM), and slower hard drives than the "personal computer."

But now, it looks like one Apple reseller has gotten a little carried away with their ad copy. CDW - generally a sane bunch - is now claiming that "The new Apple Power mac G5 is the world's fastest computer." Given that they didn't even manage to get the product name right (it's "Power Mac" in title case), I suppose I shouldn't be too shocked that they're apparently totally unaware of things like the Top 500 most powerful computers in the world...

Of course, if the Power Mac G5 really is faster than, say, the NEC Earth Simulator, I'll be really happy when mine finally arrives!