Today, astronaut Koichi Wakata from the Japan Aerospace Exploration Agency (JAXA) visited Mauna Kea and Hilo, on his way from Japan back to training at NASA in Texas.  He was taken to the summit and toured the Subaru Telescope, then stopped by the Subaru Telescope office in Hilo briefly to return some things he had taken with him into space and present our Director with a very nice framed memento showing Japan's Kibo (Hope) laboratory module on the International Space Station, with mission patches and pins and flags that flew in space, shake everyone's hand, and so on. 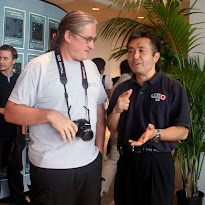 Then he spent well over an hour in the planetarium of the 'Imiloa Astronomy Center, talking about what it's like to go to space, live there for months, work there, do research there, play there, sleep there, and all kinds of things.  Tons of pictures, lots of video - a really excellent presentation.

We couldn't take photos during the presentation at 'Imiloa, but during Wakata-san's stop at Subaru, I managed to get a chance to ask him about the 2013 mission where he will spend about half a year as the first Japanese commander of the International Space Station - and only its third commander who isn't either from the United States or Russia. He's a really friendly, nice and well-spoken guy.  Viv took some photos of us talking.