A different kind of shiny toy

I've seen the beam from the Subaru Telescope's adaptive optics laser on several occasions, and those of the Keck II and Gemini North lasers many more times, but today was the first time I had the opportunity to actually see the source of Subaru Telescope's beam.

I accompanied a couple co-workers and a couple students to the laser enclosure in the dome.  After donning a hair net and face mask and taking off my shoes and jacket, I went through an antechamber containing computers, electronics and cooling equipment, and into the laser room. 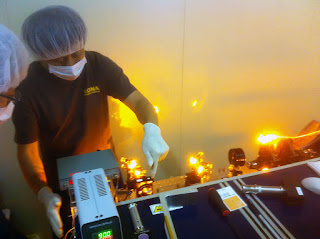 The laser room, which is kept at a constant temperature (plus or minus 0.1 degree celsius) contains a rather large laser, an optics bench with beam splitters and mirrors, which split each pulse of light into four weaker pulses with different timing, and the optical fiber the beam then passes through to the launch optics on the top of the telescope. The Associate Professor in charge of the laser and related optics explained that because optical fibers have trouble with lasers that are too powerful, splitting each pulse into four helps keep the fiber happy, and also keeps the bandwidth of the light narrow. 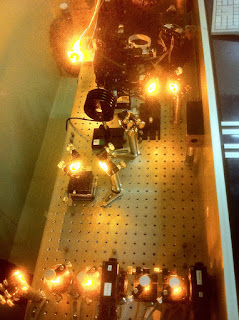