I got my daughter a new bike today.  She had been riding a Trek Mystic with 16-inch wheels, which we got a few years ago and knew she had totally outgrown... 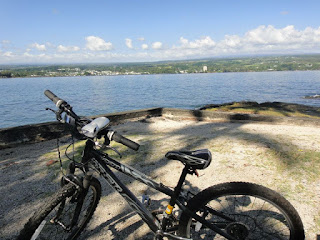 But when she and I went to the local bike store, they told us she was already too big for 20-inch wheels too!  So she skipped an entire size of bike.  In fact, she was almost big enough for full-sized women's bikes with 26-inch wheels.
Her new ride is a Trek Mt. Track 220 with 24-inch wheels, 21 speeds, hand brakes, front shock absorbers and an aluminum frame, which Trek markets as a bike for the 9-12 age group.  (Yes, she just turned... eight.)
We had been looking at the MT220 with a purple "girls" frame, but unfortunately the bike store sold the only one they had.  She was sad for a little bit, but then remembered that she is a tomboy, and decided that a black bike with a "boys" frame was certainly cooler and better than no new bike at all.
(I pointed out afterward that her mom's bike is also black with an aluminum "boys" frame and 21 speeds and all that... but the new bike is the first and only bike in our whole household with front shock absorbers!)
So after riding it up and down the driveway a little bit to get used to the size, she's been flaunting it at all the neighborhood boys whose bikes are smaller or less fully featured.