Glancing over a tourist map/brochure today in Kampala, I read about the Kampala Railway Station: This unique and beautiful building has seen millions of people and thousands of adventurers pass through its gates since 1931, when the first train, "Lunatic Line," arrived in Kampala. Unfortunately, the railway passenger service is no more, and the station is a sombre memory of better times. The "Iron Snake" still plays a role as Uganda's link to the sea, as most of the bulk cargo still moves this way to and from Mombasa.

Since I was sitting not far from the station at the time, I wandered over, took a couple photos of the facade, then took a couple of an old passenger carriage through the fence, at which point a passing police officer or two explained that I couldn't do that without proper permission, as out-of-service carriages were Critical Transportation Infrastructure™– of course. 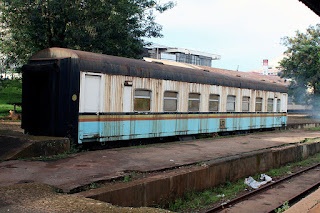 So after deleting the photos from my digital camera while they watched (skeptical that I was actually doing it, of course!) I headed off to the Railway Police office to get permission. (Yeah. You don't want to get bureaucratic on me. I thrive on this.) I met the Division Police Commander, a wonderful fellow named Paul, who was delighted that I was wearing an environmental t-shirt, since he'd done his BSc in environmental science before studying police work and law. After a long chat about the environmental, railway, and cargo differences between Uganda, the U.S. and Hawaii (during which he deduced that I posed no threat to the railway), we went over to the office, met the equally nice public relations lady, and were taken to the office of the Chief Executive to get permission from the top.

The Chief Executive was a shade paler than I, much to my surprise, and said that of course I could take photos as long as I stayed off the tracks - in a tone indicating that it was ludicrous I should even need to ask. I didn't talk to him much, but with information from the others and some help from Google, figured out that I really should have, since the URC was just privatized about 3 weeks ago, and said Chief Executive is Robert E. Mortensen, distinguished alumnus of Rutgers, the state university of New Jersey, who retired a decade ago after a 30-year career in Philadelphia at Conrail!

Yes, it's a small world. :) Anyway, Paul and I had a good time wandering around while I took a few pictures, and we parted ways on good terms. 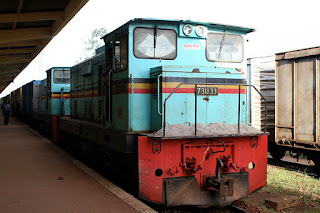 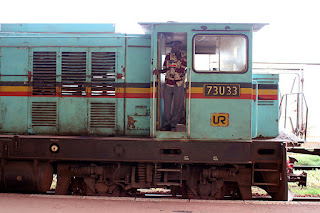 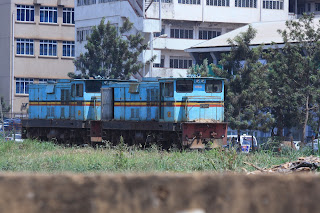