My wife is a fan of James Bond movies, in much the same way that Warren Buffett is getting by okay, Van Gogh liked to paint a bit, or Linus Torvalds is a geek.  Prefixes like "rabid" or "über-" come to mind.  This fall marked the 50th anniversary of the Bond franchise, and a "Bond 50" boxed set was released on Blu-ray.  There was a brief burst of media about this, coinciding with the theatrical release of Skyfall, and then it was pretty much forgotten... except, of course, by those of us who are married to hardcore Bond fans who had birthdays coming up.

Of course, it wasn't cheap, and when I found a local store that had it, the words "limited availability" featured prominently.  I bought the one they had on the shelf, a few weeks before Christmas, and hid it away.  Then I got to thinking... my wife is sneaky and likes to play tricks on me, but I grew up in a tricky family.  Obviously, the gift needed to be disguised somehow. Fortunately, we had boxes of various sizes sitting around, waiting to be taken to the recycling center, as well as several days' newspapers.  I decided to give her an "unboxing experience" - but one not nearly as shiny and elegant as you find when you buy the latest iThingy.

Thus a fairly large, heavy package sat next to the Christmas tree for about four days, until shortly after midnight on my wife's birthday - she insisted on staying up late the night before and opening her presents in the middle of the night.  She made it through the "normal" things - cards and money from family, some clothes from my parents, perfume and lotion from me - and then tackled the big, mysterious box... 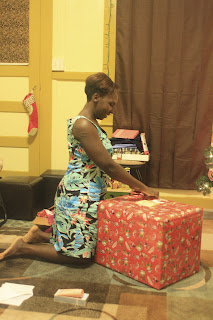 ...which unfortunately was neatly wrapped in a couple different layers of paper.  (Newspaper underneath keeps sneaky people like her from trying to read through the wrapping paper.) 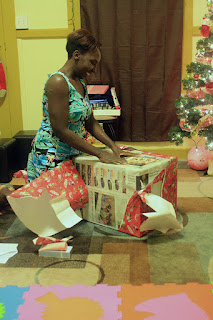 It turned out to be a box from a sewing and embroidery machine - which she already had. I'd taped it securely shut (of course).  Upon opening it, she discovered a couple old phone books near the top (for weight, naturally; I told you I come from a tricky family) and beneath them, cushioned in crumpled newspapers, another box, also neatly double-wrapped.  At this point, she thought I'd had my fun... She was wrong. 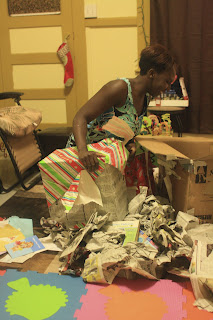 This one turned out to be from a Crock Pot slow-cooker - which, again, we already had. It, in turn, contained another box - this one only wrapped once in newspaper, since I was running low on decorative paper. 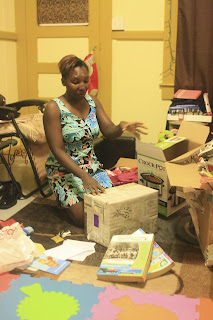 This one was a box from baby wipes - which wouldn't be a good birthday present for my wife, even if we were close to running out, and we weren't. Fortunately, this box contained yet another gift-wrapped box, in a different style of paper. 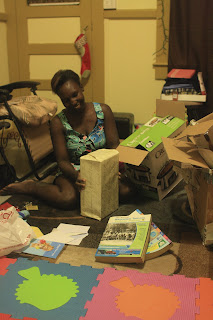 Finally, she said - progress!  Better yet, it was a shoebox - she loves shoes. Unfortunately, it was a shoebox from my old shoes, definitely too large for her and of entirely the wrong style. And it was taped on every side, naturally. 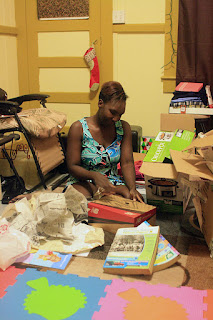 It did, however, contain another neatly wrapped package - and by now, things were getting small enough that there couldn't be too many more layers to this Russian nesting doll of a present.  This was, at last, "Bond 50" - shown below for scale, next to the packaging she had to open to get to it. 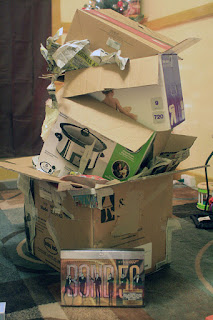 The end result was, of course, worth it, since she got a surprise gift that she loves. 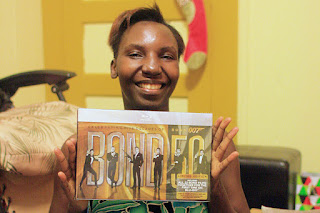 It was worth it for me as well - I got a lot of laughs, and photos of the whole process. ;)
But oh, yes, she has vowed to get revenge on me for this... I'd better watch my back!