As a child, I did my fair share of coloring, first with crayons and later with colored pencils and ink markers.  Unlike at least one friend (shout-out to Eva of Dawn and Dark Ivory fame), I didn't grow up to be an artist, so I haven't done that sort of thing in quite some time.

Instead, I wound up with careers in other fields, and in one of them, I've lately gotten to the point where I occasionally get to visit schools and talk to kids about what I do, how it relates to things they're studying, and all that.  And so, I've developed an interest once again in coloring pages - but this time, from the side of creating them!

Conveniently, I take a lot of photos of things that make interesting subjects for coloring pages.  Inconveniently, I don't have a light table and parchment paper, which I'd instinctively want to use to trace the outlines of things in a photo to create a coloring page.  I do, however, have Photoshop.  But knowing how to use Photoshop to process photos is one thing, and knowing how to use it to create a coloring page from a photo is quite another thing altogether.

I was well aware of the various filters available in Photoshop for this sort of thing.  I could "Find Edges."  Or, I could create "Glowing Edges."  Or I could "Trace Contours," or "Emboss."  So many choices!  A tutorial video online suggested instead creating a greyscale image, duplicating the layer, setting the top layer to "color dodge," doing a gaussian blur, and adjusting the blur ratio.  I tried it, but found it to be a rather complicated manual way of arriving, more or less, at "Find Edges."

Then I ran across a page suggesting the "Photocopy" filter, with its sliders for "Darkness" and "Detail."  Aha!  Photocopiers, I could handle.  (Fax machines, less so.)  I gave this a shot, then went in with a white "pen" to tidy up the image, followed by a black "pen" to strengthen some of the lines - steps which have to be done after using this filter - and in an acceptably short amount of time, actually had something I can give schoolchildren to color.  Hooray!  Here's a scaled-down version of the first coloring page I've ever created. 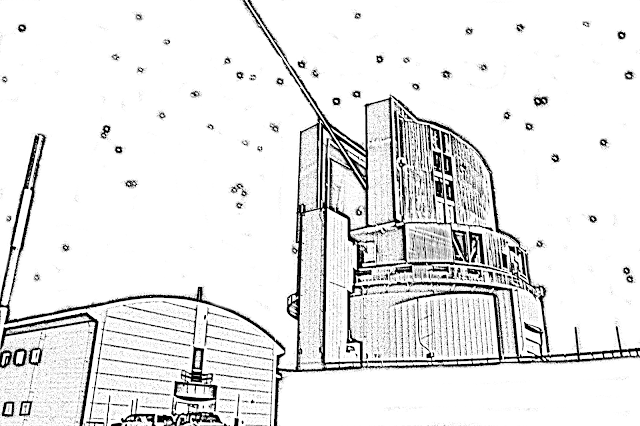 The Subaru Telescope and its adaptive-optics laser.
I intend for this to be just the first of several, perhaps even "many," such pages, now that I've found a practical and reasonably quick way of creating them.