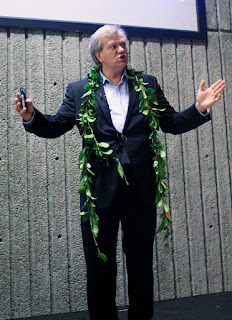 My house is in the same town as the offices of Gemini Observatory, a couple miles away.  Since Gemini involves about seven different nations, and has telescopes in two hemispheres, there's an ongoing need for meetings to make sure everything runs smoothly.  One such meeting of some board or another just took place here.

Normally, these meetings go more or less unnoticed by the public.  A bunch of "famous" astronomers (famous within the field of astronomy, basically unknown to everyone else) fly in from the partner countries, discuss whatever, and then fly back out.  If they do a little sightseeing, no one notices; astronomers look remarkably like all the human tourists.

This time, however, board member Brian Schmidt of the Australian National University had the good fortune to be one of three winners of the Nobel Prize in Physics, just a few weeks before the board meeting.  Plans had already been made, so Gemini jumped at the opportunity to have him give a talk before flying back out.

And so it was that in a large, packed room in the UH-Hilo campus center, a professor born in Montana, educated in Arizona and Massachusetts, who wound up in Australia by way of Alaska, gave his first public talk since being named a Nobel winner.  Funny how things work out like that.

I went, took a friend, recorded audio of it all for my wife, took a bunch of pictures, and even got a chance to say hi to Dr. Schmidt afterwards and let him know I'm in a collaboration with one of his co-winners.  Forgot to mention that I've also operated for someone who works with the third co-winner, Adam Reiss.  Oh well, next time!