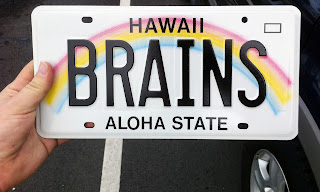 Four months ago, we bought a used car from a friend, and started discussing the idea of getting personalized license plates.  Of course, lots of good ones were already taken, like "ATOMIC," "ALIENS" and "GEEKS" - which belongs to friends of mine. Others, like "SNIPER" (which one of us really wanted) were deemed "offensive" by the government.

Eventually, we narrowed things down to a choice between "BRAINS" and, if I recall, "ERASED."

Car 54, what is the license plate of the vehicle you've stopped?
Uh... ERASED.
No, really, what is it?

Anyway, "BRAINS" won out, and about three months ago, I put in the application for it, along with the fee for personalized plates.  Yesterday, the letter came saying the plates were ready to be picked up, and today, in a quick 13-stop process due to one of the rear mounting screw mechanisms being entirely dysfunctional (Motor Vehicle Registration twice, mechanic twice, Ace Hardware three times, home once, Walmart once, NAPA once, O'Reilly Auto Parts once) that wound up only taking all morning, I got them and installed them.

About 15 seconds after I finally got the rear plate mounted the way I wanted, a lady across the parking lot at Ace asked, "What does that mean?  Is it like a Ph.D or something?"

I told her it could be zombies, or it could be smart people.  She seemed content with that answer, so I didn't have to tell her the truth about what it really means: