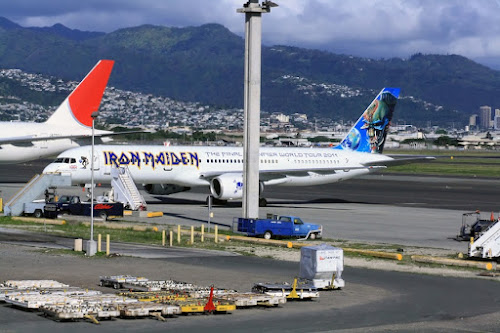 When the great Fukushima quake struck, Iron Maiden were flying Seoul-Tokyo aboard "Ed Force One," booked to play in Japan the 12th and 13th before a Latin American tour leg starting the17th. They were diverted to Nagoya, and stayed the night before flying out. Of course, when you're a band flying from Japan to Mexico, and get a couple extra days off due to your Japan shows being cancelled, you stop in... Hawaii!

I heard about it from a guy on the staff of one of the airline lounges, who's a Maiden fan - he'd snapped it with his phone on his drive in to work.

Went over to check it out; saw a lady from Hawaiian Airlines who said that the people who clean planes were pretty excited about cleaning that one.

A Wiki-Wiki Shuttle driver let me stay on his bus around the turn-around point so I could get a good shot of it. He was a local guy, with family on the Big Island. He'd seen Iron Maiden in concert a couple times back in the day, and said he'd gladly pay $110 to see them if they'd just play Hawaii.

I think he speaks for a lot of us.

(Didn't see them, just their plane.)