New research proves astrology, except that it doesn't.

Browsing the headlines this morning, I came across this gem from the web site "NaturalNews."

Pretty shocking, huh?  After a few digs at the so-called "scientific" community for calling astrology "quackery," the author got down to the meat of the matter:


Skeptics must be further bewildered by the new research published in Nature Neuroscience and conducted at Vanderbilt University which unintentionally provides scientific support for the fundamental principle of astrology -- namely, that the position of the planets at your time of birth influences your personality.

In this study, not only did the birth month impact personality; it also resulted in measurable functional changes in the brain.

This study, conducted on mice, showed that mice born in the winter showed a "consistent slowing" of their daytime activity. They were also more susceptible to symptoms that we might call "Seasonal Affective Disorder."

Pretty shocking, huh?  Imagine that - scientists inadvertently proving that astrologers have been right all along, since the time of year you're born affects your personality, and as we all know, the position of the planets is determined by the time of year.

Except that, well, it's not.  At all.  Sure, Earth goes around the Sun once a year, but all the other planets have their own orbital periods, which are mathematically related to their distance from the Sun.  This has been known since 1619 - it's called Kepler's Third Law. 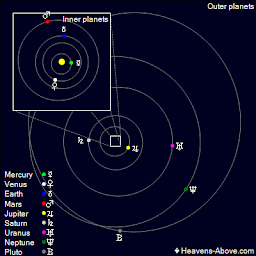 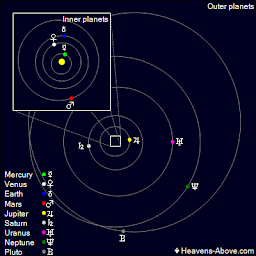 Notice how although the outer planets, like Jupiter and Saturn, haven't moved much relative to Earth and the Sun over the span of a year,  the inner ones - Mercury, Venus, and Mars - are in completely different positions?

So, while what season you're born in may very well affect what you're like - which is what the Vanderbilt research actually suggests - it has absolutely nothing to do with the position of the other planets at the time of your birth.

Unfortunately, that headline wouldn't surprise anyone at all.