I photographed Dr. Mazlan Othman, head of the UN Office for Outer Space Affairs, at the 16th Commission on Sustainable Development in 2008, for the Earth Negotiations Bulletin.

A year later, she visited Hawaii and Mauna Kea, and more photos were taken, with one contributed to her Wikipedia entry.

So if you see a picture of her in the media speaking at the UN with a translation earpiece on, or a picture of her wearing a blue and white checked shirt and holding a folder - you know where they came from.

Here's a less-commonly-seen picture of her with me in May 2009, after we saw the reboot of the "Star Trek" franchise.  It seemed like an appropriate movie to take someone to basically leads the predecessor of the Federation of Planets. 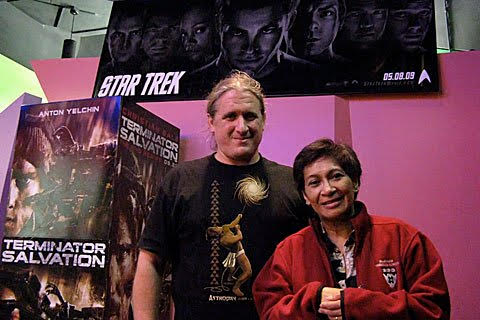