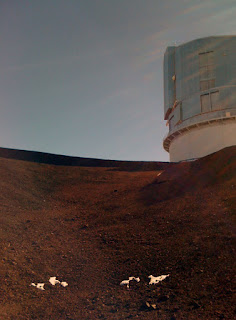 Late in the week of February 6-13, 2010, the Florida Panhandle got some snow. This led to a lot of articles in the media along the lines of "OMG there's snow on the ground in all 50 states at once!" and a similar amount along the lines of "OMG there's snow on the ground in 49 of the 50 states, with Hawaii being the only exception." Hawaii does get snow, of course - on Mauna Kea, Mauna Loa and rarely even Haleakala - but there hadn't been any snowfall of consequence since December. Having worked atop Mauna Kea for years, I know that the terrain can be conducive to snow sticking around, especially on the north slopes of cinder cones where it gets less sun. And I knew that earlier in the week, I had seen a few patches of snow remaining in a basin on the north side of the Subaru Telescope, where I work, and the adjacent W.M. Keck Observatory. On the afternoon of Saturday, February 13, between 15:21 and 15:28 local time, I was able to take a series of photos including this one, using an iPhone 3G.