Is your trip necessary?

December 09, 2007
I had a couple airline vouchers sitting around, one of which was scheduled to expire in late December if I didn't use it.  And I had a little bit of free time in early December.  So I checked to see whether the vouchers were usable, and set up a bit of a trip to visit my parents, with side jaunts to see my sister and nephew, go to the Air & Space Museum in Washington D.C. with a bunch of other frequent flyers, and various and sundry other things. I set off Wednesday morning from Hilo, getting a good view of the Hamakua Coast waterfalls from my window seat on the way over to Honolulu. 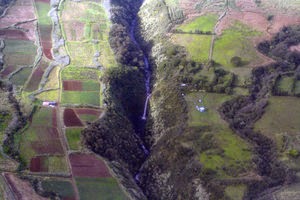 Arriving in Honolulu, I was reminded of what I already knew - Aloha was running 3 hours late due to rough weather, while Hawaiian (who I flew) were perfectly on schedule.  That's why we say "Friends don't let friends fly Aloha." 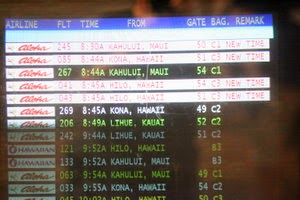 Thankfully, since Hawaiian was perfectly on schedule, I had a nice relaxing stop in the lounges at Honolulu, then slept all the way to Los Angeles on Delta, had a nice relaxing stop in the lounge there, got upgraded to first class, got on the plane, which didn't take off because something broke, got off, got on another plane with slightly fewer seats (still managing to be in first class), which did take off, and so on.

North of the Mason-Dixon line, things were pretty snowy.  My stop to change planes in Minneapolis was snowy, and the plane east from there had to get de-iced before takeoff.  Flying east, I had a good view of Racine, Wisconsin just as we started out over Lake Michigan, and later, as we were beginning our descent, I got to see Three Mile Island in Pennsylvania. 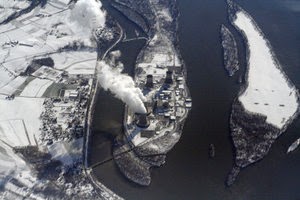 After a couple nights' rest in New Jersey, Saturday came, and it was time to head down to Washington with my parents to see my sister and nephew, the other frequent flyers and the museum full of airplanes. At 30th Street Station in Philadelphia, we learned that it was National Elevator Escalator Safety Awareness Week, then took the stairs down to our Amtrak train to Washington D.C. We got to see lots of scenery from the train, including the Susquehanna River. 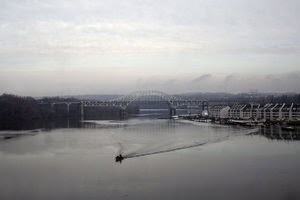 Once we arrived in Washington, we found my sister Sue and her son Mitchell, and all had lunch in the food court at Union Station.  Everyone decided to take the Metro over to the Smithsonian (changing at Chinatown) but I felt like walking, so I went briskly down Louisiana Avenue to the Mall. 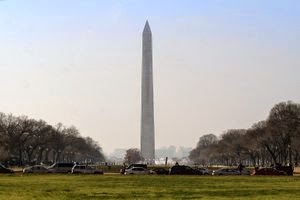 While waiting for everyone else to show up, I took more photos.  Above is the Washington Monument, and below is the Capitol, where we banish our worst criminals in a practice we call "capitol punishment." 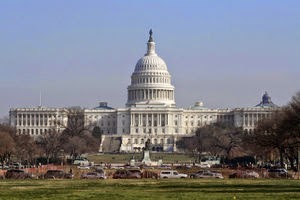 Once we were all at the Air & Space Museum, we hung around for a bit until all my fellow frequent flyers arrived, then got a private guided tour of some of the highlights. 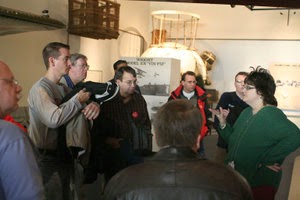 Of course, I spotted this poster from the WWII era.  Needless travel, indeed! 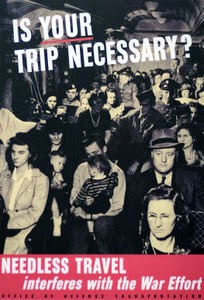 I guess flying from Hawaii to the east coast and back partly just to use up some vouchers from the airlines and hang out with some other frequent flyers in a museum full of airplanes might qualify as an "unnecessary" trip... There's nothing quite like a museum that tries to make you feel guilty for coming to see it.