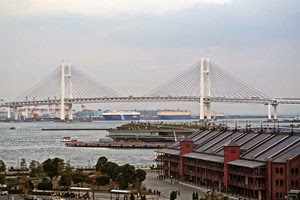 At the beginning of November, I went to Yokohama, Japan for a week to attend a conference.  Since I like Northwest Airlines and had never flown between Japan and anywhere in the US except Honolulu, I opted to fly to the mainland and go from there.

I caught up with my friend and fellow conference-goer, Twig, at the Detroit airport just as our 747-400 bound for Japan was boarding.  I knew we would be on the same flight, but I didn't know that he'd wound up right across the aisle and one row back!  It made it easy to chat now and then during the very long flight!

Our flight path from Detroit to Tokyo-Narita took us over Alaska, which was interesting to see.  I've still never been on the ground there, and I suppose I really have to work on that sometime.  We got into Narita on-time, though... and then had to wait for our friend Peter, whose flight from Vancouver was running a little late. 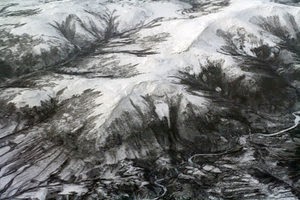 We all took the JR Line Narita Express train down to Yokohama.  This train knows a lot more about where it is, where it's going, and when it's going to get there than a lot of trains I've encountered around the world.  Unfortunately, other than a short subway ride in Yokohama, this was the only train I got to ride during my visit to Japan - no bullet train for me!  Maybe if I get back over there sometime and have more time on my hands. 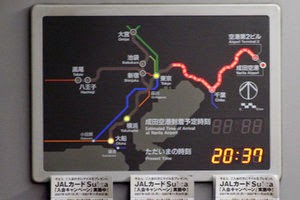 This is one of the bridges across the harbor in Yokohama.  It reminds me a little of the Century Bridge in Haikou, Hainan Dao, China, but the design is different; I'm pretty sure Century Bridge has a singel suspension tower.  Anyway, it's a lot more modern than the old Philly and New York suspension bridges I grew up around.

Here are some buildings seen in Minato Mirai 21, the redeveloped harbor/waterfront area of Yokohama.  In the foreground left of center is the Navios Yokohama hotel, which is where I stayed.  At the far right is World Porters, an upscale sort of mall.  And in the background is the Landmark Tower Yokohama - the tallest building in Japan! 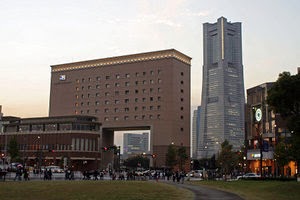 Cosmo Clock 21 was the biggest ferris wheel in the world when it was built almost 20 years ago.  It's still the biggest clock.  There's a giant digital clock in the middle, and at night, the ends of the arms that hold the ferris wheel cars light up, 1 per second, to provide more accurate time-telling.  It's in the CosmoWorld amusement park, and there's a roller coaster that runs around its feet. This is the Minato Mirai pier, where one can catch various ferries or harbor cruise boats.  It's located right by Pacifico Yokohama, the big conference and expo center where I spent most of the week.  In the background is one of the harbor bridges. 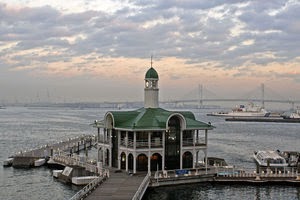 The city lights of Yokohama are pretty at night, especially given all the little waterways around and through the Minato Mirai 21 area.  Here, I found some old-fashioned boats (used to give boat rides for tourists during the day, I think) moored near the Bankokubashi Bridge, with the Landmark Tower Yokohama and part of Queen's Square in the background. 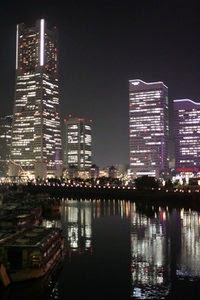 One morning, some photographers were shooting advertising pictures of a little car outside the hotel.  It's a Mazda "Verisa," but I don't think I've ever seen one like it in the states.  Maybe it's a model that's only sold in Japan, or something. 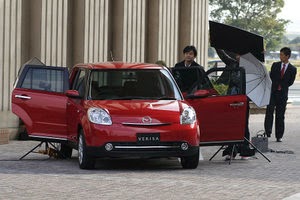 On the last day of the conference, my friend Mika came all the way from Tokyo to say hi!  She's very nice but a bit camera-shy, so I won't put a picture of her in this.  But I will include a picture of the gift she brought me - a Japanese wind chime!  It is hanging on the front porch of the house in Hawaii now, and when there's a good breeze, I can hear it chiming.  Arigatou gozimasu, Mika-san! 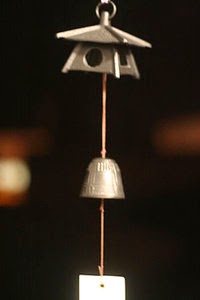 Overall, I had an okay time in Yokohama.  I didn't have any friends in town ahead of time, and I don't speak enough Nihongo to really make any new ones during my visit, so I pretty much just hung out with the folks I went to the conference with, and walked around taking pictures in my free time.  If I go to Japan again, I want to try somewhere more rural, to see what that's like.  Maybe I can go visit my cousins in Okinawa sometime!