As part of a trip to visit my parents for my father's birthday, I chose to take Northwest flight 98 from Honolulu to Minneapolis. This flight operated on a DC-10, but the DC-10s were being retired, with the final flight January 7, and I needed several thousand more miles to hit top-tier "Platinum Elite" frequent-flyer status, so I figured I'd go for it. I was able to upgrade to World Business Class on the way to Minneapolis, but not on the way back.

The plan was to fly over from Hilo to Honolulu, as usual, spend several hours flying to Minneapolis in a nice seat that goes way back and has a footrest, with good food and movies and all that, then continue from Minneapolis to Philadelphia. (And of course, to repeat the process in reverse, a few days later.)


Of course, the Scottish poet Robert Burns had a thing to say about the best-laid plans...

I got to Honolulu easily enough, wandered over to Northwest, checked in, hung around a bit, got on the plane, and settled into the nice seat. We left the gate to taxi for takeoff, and I dozed off. About 20 minutes later, I woke up, and noticed that we were still on the ground, and not even moving. Shortly thereafter, the captain announced that we were going to go back to the terminal due to problems with the second backup electrical system.
We taxied back to the gate, and I was given a little envelope-style thing (tear off the sides and the top) containing two vouchers - one redeemable for 1,000 free frequent flyer miles and the other for $25-100 off another ticket. Maintenance folks came on, and had us get off the plane, saying that we could leave our personal belongings aboard; I took mine with me as usual.
A couple hours passed while they worked on the plane and moved it back to the original gate. We got back on; I settled back into my nice seat, and we started taxiing. Just when I thought we were heading for takeoff, we veered off the taxiway and parked at a gate at the wrong end of the airport. The maintenance folks came back on, and we were told to get off and take everything with us.
After a bit of waiting, the staff decided that the plane wasn't going anywhere that night, so they got the galley carts off the plane and handed out free food and drinks, after which I walked down to the baggage office counter and was given vouchers for free limo/taxi rides to and from the 3-star Ala Moana Hotel near Waikiki, where I got a free room along with vouchers for free breakfast and lunch. I figured out that the flight had been rescheduled for 5:30 PM the next day.
In the morning, after noting that I had a nice view of the Ala Wai Marina and the ocean, I ended up not using the breakfast and lunch vouchers, choosing instead to go for a late breakfast at Sam Choy's on Nimitz with Michael, then back to the hotel for a bit more rest.
I headed back to the airport in the afternoon, and stopped at the check-in counter to see whether I needed to get my boarding pass re-issued. The very nice lady (who I shall say hi to next time I pass through) said it was fine, then handed me a voucher for a free round-trip within North America and the Caribbean. The security folks hadn't gotten the memo about people being allowed to use yesterday's boarding passes, so they called the nice lady and she came over and explained it.
While I was waiting for my delayed flight, that day's on-time flight arrived from Minneapolis, and I was able to get a photo of both aircraft, which everyone seems to think are the last two DC-10s in service with Northwest. Ordinarily, they would never be in Honolulu at the same time any more. 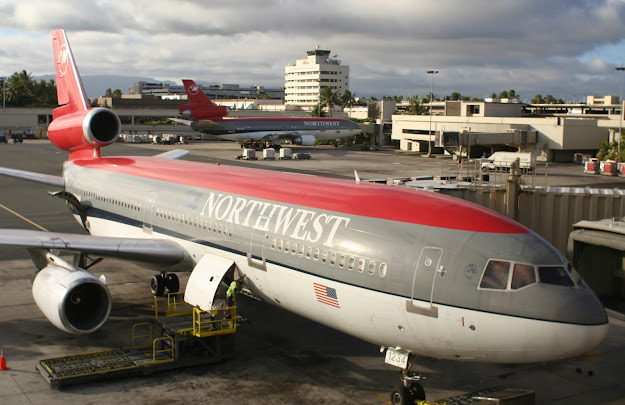 I went back over to the gate, got on the plane, and this time, it all went pretty much according to plan. Sure, some people's reading lights wouldn't turn on, and others wouldn't turn off, and most of the movies started late, and Miami Vice never showed at all, but the important parts worked.  Dinner was a rather nice chicken breast and some other stuff, followed by ice cream with strawberry topping and walnuts.
Arriving in Minneapolis, I got off the plane and was handed a voucher for $200 off another ticket. Boarding passes for all connecting passengers were waiting, alphabetized, on a nearby table, and when I got mine, I noticed that stapled to the back of it were two more vouchers - another redeemable for 1,000 free frequent flyer miles and one for $25-75 off another ticket.
The trip from Minneapolis to Philadelphia was every bit as uneventful as the one from Hilo to Honolulu had been. I e-mailed Northwest suggestions on how they could have done things a little bit better in some small ways.
So, on the down side, I got to my parents' house 24 hours late, and didn't have a free day to hang around and visit people before my father's birthday. On the other hand, I think the vouchers and free stuff I got are probably worth more than my ticket cost... so I'm looking on the positive side of things.
On my way back to Honolulu, I flew from Minneapolis (in economy class, alas) on the same plane! It was well-behaved, but there were some problems with the in-flight entertainment, so people around me were unable to properly hear the audio for two movies (both of which I'd already seen). Upon arrival, everyone in economy class was given a voucher redeemable for 500 free frequent flyer miles... and a friend gave me his, since he isn't in the frequent flyer program.
A day and a half after I returned, I got a very nice email in reply to my suggestion, thanking me for it, noting that suggestions do collectively form the basis of improvements in their service, thanking me for letting them know that I was very pleased with the level of service I received from their ground staff and flight crew during the delay, and promising that within 3 days, another 23,000 frequent flyer miles would appear in my account. Three days later, my account was credited with a "Customer Relations Bonus" of... 25,000 frequent flyer miles. I thought it must have been a typo... until another 23,000 frequent flyer miles showed up less than a day later!
I like them! :)