Another day, another 10.5 pesos

March 15, 2006
I did, eventually, wind up going over to the conference venue with my team leader and our director this afternoon. It's big. Really, really big. (Wait... have I said this already about something else?) Today, it was in a state of frenzied construction activity, since the conference starts tomorrow.
Well... except one room. The room our team office is supposed to be in. That one was in a state of frenzied relaxation, as various people sat doing nothing, waiting for various other people (who weren't there) to show up and do other things that had to be done first. But we're all optimistic that come tomorrow morning, we'll have things like network access. And furniture. And, um, walls.
Speaking of tomorrow morning, a fellow by the name of Vincente Fox is going to be speaking. Perhaps you've heard of him. This means that every street within about a half-kilometer or more of the venue is going to be blocked off. Police are everywhere. Paramilitary-looking guys are everywhere. No guns, but large numbers of muscled guys in all black. So getting there in the morning will be interesting.
One of my teammates had some difficulty getting her room at the hotel (because some other people didn't check out on time) so I gave her my key before I left, so she could shower and go on-line and stuff. By the time I returned at 7:00 PM, her roommate (another teammate whom I just love to little bitty pieces) had shown up as well, so we all chatted for a half-hour, then it was time to head to dinner.
11 people. 3 taxis. Rush-hour traffic in México City. But eventually, we made it to a certain local watering hole/eatery that was allegedly shot up by one Poncho Villa some years ago, where I had some very nice rueda de robato, al gusto, plancha (I hope I got that all right) and of course a lot of jugo toronja. Yummy! Afterward, our director inexplicably started chatting with a young couple a couple tables over, who turned out to both be actors from Canada. After he finished, we headed outside to wait for taxis, and the actress in the couple came out to chat with us all about what we're doing. So if you've ever wondered what I'd look like with an honest-to-goodness Hollywood starlet's arm around my shoulder, now you know. 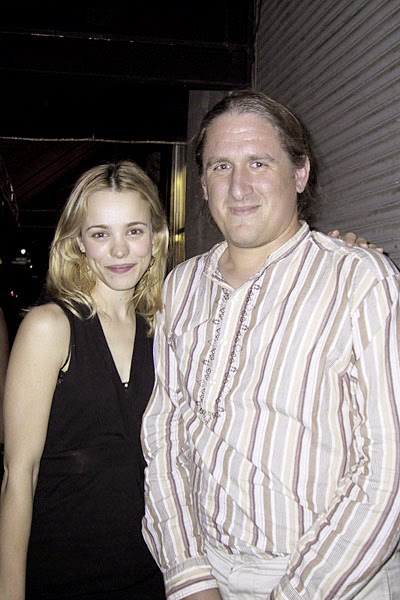 By the time we got back at 11:30 PM, the hotel had managed to come up with the correct room for my teammates, so we said our goodnights and they "moved out" of my room. And now it's time for me to get a half-dozen or so hours of sleep.
More tomorrow, I hope.