Touring observatories as an extreme sport 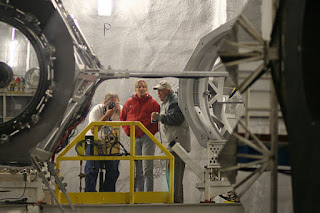 Here in Hawaii, the University's Institute for Astronomy frequently hosts visiting astronomers from abroad. One of our postdoctoral researchers hails from eastern Europe.   She had some observing time on the summit of Mauna Kea this week, and was joined by her father, who had come over as a visiting scholar and to see her complete the Ironman Triathlon last weekend.He's a retired professor, researcher, member of their nation's national Academy of Sciences and their national committee for the International Astronomical Union, et cetera. He even has a minor planet named after him.

They had a full night of observing time Wednesday, a half-night Thursday, another full night Friday, and another half-night Saturday. For the last three nights of their run (Thursday-Saturday), I was their telescope operator. My colleague and I had discussed ahead of time the idea of seeing if her father could visit some of the other observatories on the mountain - it's not uncommon for VIPs visiting the mountain to tour a few facilities - and he was looking forward to it.

Of course, we are all a little crazy, so... he wound up visiting all of them. An even dozen, in less than 54 hours. There are people who've worked here on the mountain for years and haven't managed to visit everything yet.

Thursday night, we drove up after dinner and stopped by the W.M. Keck Observatory (where I work occasionally as an aircraft spotter) and were given a rather impressive tour of one of the telescope domes by one of the observing assistants there. Then we headed over to the UH 2.2-meter telescope (which I operate part-time) for our half-night of observing. Between sunset and around 1 in the morning, we also managed to visit the control room and legendary pantry of the Canada-France-Hawaii telescope (CFHT), the old UH 0.6-meter telescope (as big as the largest telescope in his country!), and the control room and dome of NASA's infrared telescope facility (IRTF).

Friday, we stopped at Hawaii's Very Long Baseline Array (VLBA) dish on the way up, then observed all night at the UH 2.2... with a couple "field trips." We toured the control rooms and domes of the CalTech Submillimeter Observatory (CSO) and James Clerk Maxwell telescope (JCMT), and even went inside the cassegrain focus of JCMT, then visited the control room of Japan's Subaru telescope, which wins the prize for "most flat-panel displays for a single telescope."

I hope my observers don't all want to do this now!

(Of course, by corollary, this means I got to be in all those observatories too, but there were only a couple I hadn't already been to.)