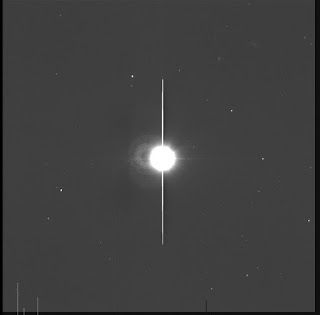 The observer schedule for this semester had a few "open" nights listed, and I wound up with a whole shift full of them. This means that for the next few nights, I have no idea who I'm working with. So I got to work at 6PM, which is about the earliest anyone would actually ever want to start working. Nobody was there, but I wasn't surprised, only a couple people I work with do start that early.
6:30 came and went, no observer.
7:00 came and went, the sun went down, no observer. I started wondering.
7:30 came and went, no observer. By now, I had opened the dome, figured out how to use the instrument with some help from our systems engineer, and taken a picture of a random bright star, HR 6152.
7:45 came, and I discovered that the professor who was supposed to be observing tonight had delegated (as is often the case) to a grad student, who in turn had delegated to a presumably lower-on-the-totem-pole grad student, who had never even used the instrument before, and who figured, "why show up before it's reasonably dark?"
So we all had a good laugh about all this. And I got to learn something, and take a picture, woohoo! Go, me!
Now if I have any more situations where the observer doesn't show up, wanders off, is eaten by a ravenous flock of Nene geese or whatever, I know just about enough to take some pretty pictures by myself!