Since last August, I've occasionally run a telescope for the university. A lot of the observations over the last academic year involved comet P9/Tempel-1, which had been selected as the destination for NASA's "Deep Impact" mission. One of the members of the NASA Science Team for the mission is a professor at the university, and she's had quite a few postdocs and grad students observing the comet for her.

For several months, I've known that there would be some public outreach surrounding the mission. Public outreach is nothing new -- the university's Institute for Astronomy has a person who specializes in science education and public outreach. There are frequent public talks at the local campus, often by rather well-known figures in the field of astronomy, which draw anywhere from 50 to 150 people. But this... this would turn out to be a little different.

Initially, I was going to be in the control room of the telescope I run, facilitating video links to the lecture room where the outreach program would take place. Nice. Easy. Familiar.

But then... plans changed a little. Instead of an outreach program, the Institute became involved in four of them - one on this island, one on Maui, one at a museum in Honolulu, and one on Waikiki Beach. And I was assigned to "run the show" technologically on Maui.

Saturday, I flew over to Maui with my trusty PowerBook (with iSight video camera for iChat AV video chats), my backpack of cameras, and a box full of goodies. Several other boxes had already been shipped over ahead of me. Little did I know how quickly the goodies would vanish. The outreach officer met me there, and we caught up with local professors and astronomers who would be involved, started hooking up technology and testing various things. By the time I left the campus at 10 PM Saturday, I knew some things worked, knew a couple didn't, and, after being accosted by a half-dozen youth wanting to know where the comet event would be on Sunday, knew we might get a bit of turnout from the public.

Sunday morning, I went to the summit of Haleakala, said hi to an observer at one of the Institute's facilities, and checked things out. 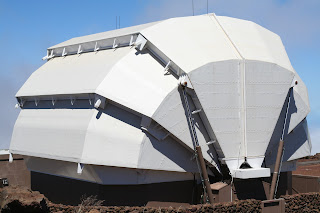 Faulkes Telescope North enclosure on Haleakala
I came back down, got things all set up for the program, then had to rearrange furniture and make the room smaller (partitions) at the last minute.

The program was... well, I've been describing it as "like Woodstock. A chaotic mess, but a huge, public, impressive chaotic mess."

Our room occupancy limit was around 150 people. In my half of the room, I estimated 300. The facilities guy was nervous because the air conditioning couldn't handle that many warm bodies in one place. He ended up opening up two more rooms to show the same NASA TV feed that was being shown in the other half of the main room. 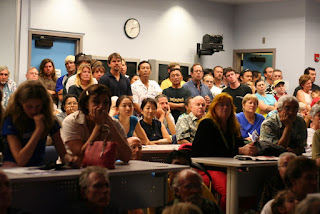 In my half of the room, NASA TV only showed up right around impact. The rest of the time was spent doing the following:

- Showing a DVD from NASA containing information on the mission, animations of the impact, and footage of the launch.

- Video chatting with Mike Martin of Boeing (which supplied the Delta II launch rocket for the mission), who was on the summit of Haleakala for the impact.

- Showing Mike's presentation on the integration, launch and trajectory of the mission, with Mike narrating over the video link from Haleakala.

- Video chatting with Mike Maberry, Assistant Director of the Institute, who was on the summit of Haleakala with Mike Martin.

- Video chatting with Bill Giebink of the Institute, who was on the summit of Haleakala to make sure the Faulkes Telescope worked well.

- Video linking upstairs to the room where a group of students from Hawaii and Iceland, and educators and astronomers from Hawaii, England and Iceland were observing with the Faulkes Telescope, to see one of the astronomers explaining to the students how their observations would work.

- Showing a presentation by astronomer Jonathan Williams of the Institute, who also fielded questions as part of a panel along with fellow astronomers Shadia Habbal and J.D. Armstrong and educator Sharon Price.

- Video chatting with Hiroko Shinnaga at the Caltech Submillimeter Observatory on Mauna Kea.

- Video chatting with Glen Petitpas at the Harvard-Smithsonian-Taiwan Submillimeter Array on Mauna Kea.

- Showing near-real-time images off the Faulkes Telescope on Haleakala.

This was all done in a semi-scripted manner, with the audience, our in-person panelists and our videochat guests all interacting over the video chat links. Those of us working the event thought it was crazy... the audience seemed to think it was great. I don't think I've been asked for an autograph before.

The scene in Hilo - where my family went - was similar. Crowding. On Waikiki Beach, the crowd was estimated at 10,000 people. Maybe we've underestimated the popularity of astronomy?

I flew back the next afternoon - and went right back to the control room, to operate the telescope for another 4 nights. The science collaboration is impressive - as I type this, a video monitor near me is displaying tiled live connections to Kitt Peak in Arizona, La Silla in Chile, and multiple observatories on Mauna Kea. The amount of data being gathered by each telescope is huge, and when it's all put together, I don't even want to think about how many lifetimes worth of man-hours will go into analyzing it.

Here's a photo of the comet, which I snagged from the Faulkes Telescope web site. You might also read the local newspaper stories about the events on Maui and in Hilo. 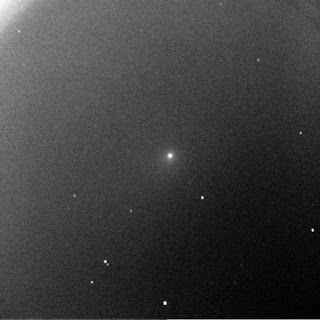