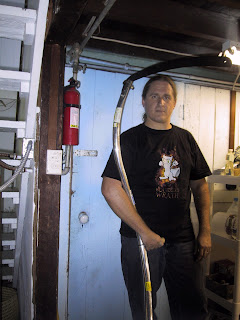 Part of it was probably triggered by a death in my extended family. But most of it was just thinking about life as usual.
The first thought I had, a couple weeks ago, was that I've had an interesting life. Not to say that it's not still interesting, but basically, if a telescope fell on me or something, people would think of my life as having been interesting. And I find my own life interesting, too. Sometimes in the "may you live in interesting times" ancient Chinese curse way, but always interesting in one way or another.
More recently, I realized that I don't have an "I must do this before I die!" list. Most of the general, mundane things I figured on doing in life, I've done. I've got a wife, a kid, a house, a car. I've had a career or two of sorts. And the particular way all those things have played out has tended to be decidedly non-mundane, in terms of things like who my wife and friends are, where the house is, what work I've gotten to do, and so on. That's really what's made my life interesting.
So as a doddering 33-year-old, I find myself at peace with the concept of death. This is not to say that I'm particularly looking forward to it or thinking suicidally; I think life is more fun, and if it persists, I'm sure additional interesting things will happen. But rationally, if the telescope does fall on me, aside from mild disappointment at having probably missed out on a few things, I'm not going to really have regrets. I'm okay with who and what I've been and done.
Interestingly, this is a good thing in my opinion, because "life vs. death" is now one less thing to have on my mind, and my mind would certainly benefit from having fewer things on it. More on that topic soon, I hope - telescopes permitting.