That VIS place I keep mumbling about 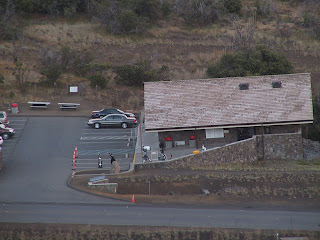 I took this photo just after sunset, from the top of a cinder cone on Mauna Kea. This is the Visitor Information Station at the Onizuka Center for International Astronomy, located at 9,300 feet elevation. Yes, it's on (more than a bit of) a hill. Inside the building are a whole bunch of exhibits, computers, a video projection area with seating, and of course a gift shop that sells all kinds of nifty stuff.

Outside on the patio and in the parking lot, a half-dozen telescopes are set up for the evening stargazing program. They are, from left to right:
The Meade, Celestron and Televue all have motor drives that move them slowly to follow stars moving across the sky. The Meade and Televue also have "goto" computer controls with star catalogs, so celestial objects can be easily and automatically targeted. Not seen here is another Celestron, 12-inch if I recall, that's used for solar viewing during the day. That one has a secondary scope for viewing solar eruptions and a spectrograph mounted on it, as well.

Yes, I know how to use 'em (and how to get 'em out, set 'em up and put 'em away). Oh, the yellow thing on the rock wall is a case for eyepieces and adapter rings.