Metric century on the Hamakua Coast 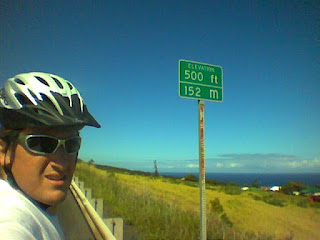 I might have gone further had I actually practiced, eaten a good breakfast, gotten enough sleep, remembered to grease my bike's chain, and lost the extra 40 pounds I'm lugging around first... and had someone not wanted me to get home faster so they could go to a dance class. :)

I took this photo with my Nokia 3650 smartphone's camera, held at arm's length. Unfortunately, the 3650 is a 900/1800/1900Mhz "world" phone, and after selling it to me for quite a lot of money, AT&T chose to upgrade all the towers in my area except the one nearest Hilo to... 850MHz. It's not very "mobile" when going more than 10-15 miles from that one cell tower results in a total lack of service coverage. When I finally got coverage again in Honoka'a and called home, I learned that they'd been calling hospitals to see if I'd been brought in injured or dead.