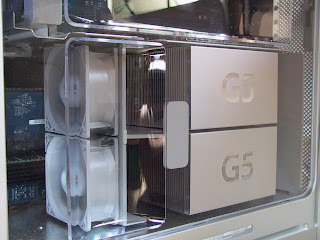 It would've been a busy month anyway, what with being in the midst of a large programming project, but infrastructure made it even more fun. On the 16th, my long-awaited Power Mac arrived from Elk Grove. This represented a huge boost in processing power for the programming project and other computationally intensive work, but of course there was some time involved in getting it set up, transferring the project over to it, and so on.

Then, on the 24th, Apple released the latest version of their operating system, Mac OS X 10.3 "Panther." To maximize the amount of optimization for the new Power Mac, I upgraded to that, of course. There went another little chunk of time.

Now I'm into "crunch" mode, working on wrapping up the primary development phase of the project before getting ready to spend a couple months testing and tweaking!

Oh, what, you want my thoughts on the Power Mac? Okay, here they are. It's shiny! And fast. Put it this way - on a number of processors times number of megahertz basis, all the other computers I use regularly, combined, total up to only seventy-five percent of this one.

In other news, excerpts from the two chapters I wrote for John Levine's 2000 IDG book, "Internet Secrets 2nd Edition" are now available here.